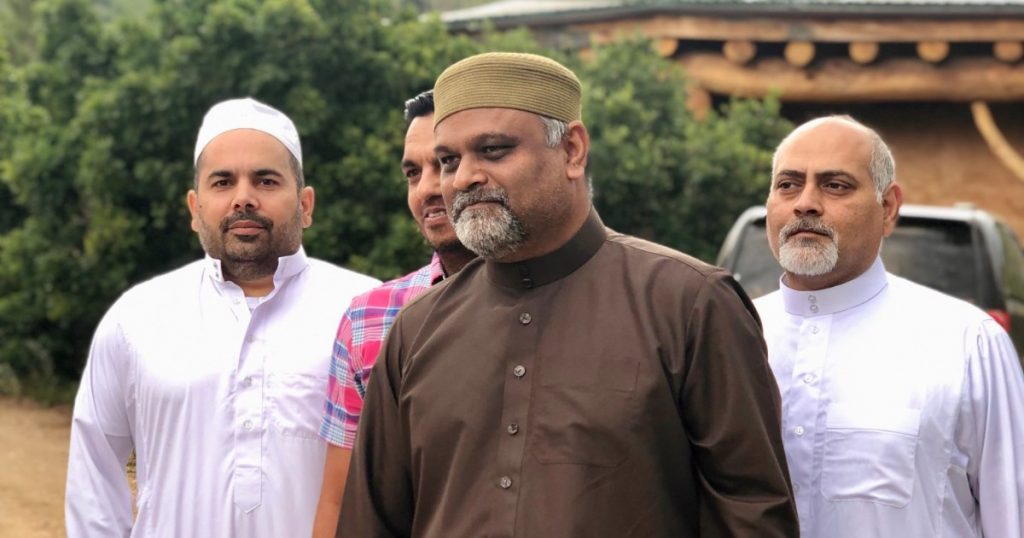 We had a tremendous few weeks here in the USA during our tour of the West Coast! Our international team of delegates travelled between Mount Shasta (Yreka, CA), Los Angeles (CA), Phoenix (AZ), Sedona (AZ), Taos (NM), Tempe (AZ) and Ojai (CA) for a series of events promoting the Messiah Foundation International’s universal message of divine love and spirituality. The CEO of MFI, Sufi Spiritual Revivalist Younus AlGohar, was the keynote speaker at the programmes. The President of MFI UK, Rev. Shaykh Steve Bell, and the President of MFI USA, Shaykha Azucena Avila, also addressed our audiences.

It is with bittersweet feelings that we wrap up this incredible tour – while our international team of delegates are sad for it to end, we are equally excited as we look forward to our upcoming events around the world. 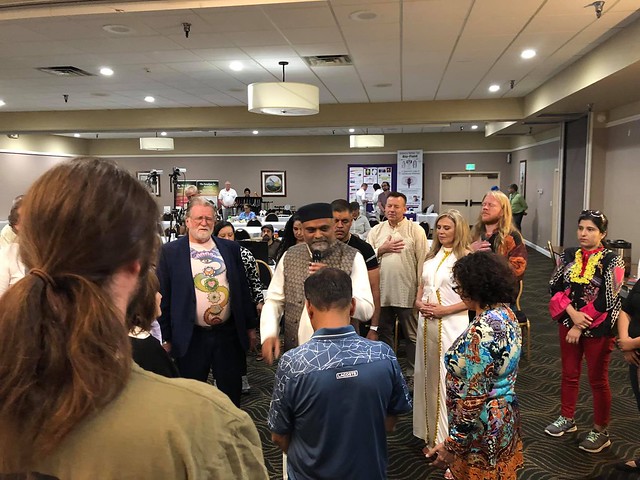 Here are some of our favourite moments from this tour.

Mount Shasta Spiritual Heart Activation Event (With 5D Events) was the first event of our tour. It was located at the sacred grounds of Mount Shasta in Yreka. This two-day seminar was attended by spiritualists from all around California and Arizona. Sufi Younus AlGohar and Rev. Steve Bell spoke about topics like Spiritual Without Religion, Liberating Your Inner Person and The Living Jesus. Free spiritual healing and Activation of the Heart were offered. The Ring of Love on the final day – where all participants gathered to dance and sing in a joyous celebration of love and unity – was particularly powerful.

One member of the audience grasped Sufi Younus AlGohar’s hand and declared, ‘Thank you. Jesus was here, I just know it.’

Another participant exclaimed, ‘As soon as I saw your aura, I knew you were the real deal.’

Universal Sufi Dhikr at the Lama Foundation was one of the most significant events in the history of the Messiah Foundation International. For the admirers of His Divine Eminence Gohar Shahi, there is nothing more memorable than the scenes from the Dome at the Lama Foundation spiritual retreat centre (Taos, New Mexico). His Divine Eminence Gohar Shahi, in His majestic splendour, had been seated at the centre of the room. People of all colours, religions and backgrounds had joined hands as they circumambulated around Him. The sounds of their voices as they chanted ‘Allah’ in unison were not just pleasant to listen to; they represented the undeniable truth that in the presence of His Divine Eminence, humankind could be unified. That was July 1997.

In July 2019, 22 years later, we returned. For our team, going to the Lama Foundation was a spiritual pilgrimage of sorts.

We were warmly welcomed by the residents of the Lama Foundation. Sufi Younus AlGohar first gave a short speech on Sufism. Then, in an act of exceptional spiritual bounty, Sufi Younus AlGohar personally granted every individual Activation of the Spiritual Heart.

What followed was a short Sufi Dhikr. Shaykh Nadeem Siddiqui and members of MFI USA then performed a Sufi dance to the majestic name, ALRA.⁣ To end this wonderful ceremony, a Q&A session was held, where many of the aspirants enthusiastically asked questions one after the other.

Every single person who entered the Dome that evening left it transformed. Divine power, might and rapturous love overwhelmed the spiritual senses of everyone there.

Sabina Jones, a volunteer at the Lama Foundation, said, ‘I am forever grateful and I will remember the things that were said…During the Dhikr, when I was sitting there and you were all dancing around us, I closed my eyes and I felt myself with God.’

Another resident at the Lama Foundation exclaimed, ‘During the Dhikr when one of your members was in the centre, the way the voices felt – it felt like his voice was surrounding the Sun – like the Sun was here and his voice was reaching up there.’

NUWTC’s Leaders in Action for Global Transformation Symposium was a special event held in Phoenix, Arizona where over 25 spiritual leaders from different communities came together to discuss how to work together for the betterment of humanity. Sufi Younus AlGohar delivered a very special talk on how to improve our global society practically with the help of the spiritual sciences, leaving an everlasting impression on the audience. Rev. Steve Bell conducted the Heart Activation Ceremony and Shaykh Nadeem Siddiqui led the Ring of Love where everybody joined hands in chanting, singing and dancing.

The Shrine of Holy Wisdom Heart Activation Ceremony in Tempe, Arizona was another hugely successful programme. Suf Younus AlGohar spoke about how to transform the human heart into a Shrine of Holy Wisdom practically. This event was attended by local leaders and aspirants of the spiritual path alike. Spiritual healing was performed followed by the Dastar-e-Fazilat Ceremony welcoming two new members to the rank of ‘Shaykh’. ⁣

Sufi Younus AlGohar then led an impromptu Transcendental Meditation session and all attendees were invited to join hands in a circle. Sufi Younus AlGohar explained his intentions to introduce everybody to individuals in the spiritual realm. He led the chanting of ‘ALRA’ and then the mantras ‘RA’ and ‘MA’ (relating to the Sun and Moon respectively). Thereafter, the mantras ‘RAMA’ and ‘ALRA’ were chanted again. The feeling of the room was very trance-like and everyone was engulfed by the immense divine energy and love in the atmosphere.

Thereafter, Sufi Younus AlGohar took the stage to discuss applied spiritual sciences. A questions and answers session followed and a Dastar-e-Fazilat ceremony was held to award a wonderful gentleman with the title of ‘Shaykh’.

John Hinton, a spiritualist who had the honour of hosting His Divine Eminence Gohar Shahi in his home in 1997, was overjoyed to be there. As fate would have it, he had attended this programme not knowing it was arranged by the followers of HDE Gohar Shahi. He embraced Sufi Younus AlGohar and tearfully told our team about his fond memories of HDE Gohar Shahi. We were honoured to partake in this delightful reunion with such a wonderful person.

The Iman Cultural Center for Peace and Tranquility in Los Angeles, California, was the venue of our penultimate programme with 5D Events. This event was attended by many members from the local Iranian and Turkish community as well as the broader spiritualist community. Every member of the audience was individually granted Activation of the Spiritual Heart and given extra special blessings by Sufi Younus AlGohar.

An individual who had been watching ALRA TV, the MFI’s official channel, specifically travelled from San Francisco to meet our team and Sufi Younus AlGohar.

The Ojai Center for Spiritual Living in California was the final event in our hugely successful tour – and what a wonderful way to end it! The turnout for this programme exceeded all expectations. It was as if all the residents of this charming town were eagerly awaiting this event. The proverbial red carpet was rolled out as the ceremonial horn was sounded upon Sufi Younus AlGohar’s arrival at the premises. ⁣The whole audience was entranced by Sufi Younus AlGohar’s speech about the celestial form of spirituality. Everyone seemed energetic and enthusiastic during the entire event. A Dastar-e-Fazilat Ceremony was performed for Shaykha Paula and Shayka Helen as they were given the prestigious title of ‘Shaykh’. All participants joined in with a Ring of Love with great enthusiasm and received the Activation of the Spiritual Heart.

Shaykha Helen told our team after the event, ‘’I felt I was with my family. I came home. I was crying: I am home, I am home! This was very beautiful to me.’

Shaykha Paula said, ‘’We send His Holiness [Younus AlGohar] with all the love and energy of Ojai as he tours around the world!’

Reverend Marilyn Miller, the Minister of the Ojai Center for Spiritual Living said, ‘It was a beautiful experience – we knew it would be. It was so very special. We appreciate all you coming. We appreciate your consciousness, your gift and your presence. I really enjoyed the discourse. I am glad [Sufi Younus AlGohar] is making a world tour.’

Special thanks to Shaykha Azucena Avila, Steve Bell, Saeed David Farman, Dr Sarah Larsen, Robert Newton, Sandie West, Fatima Gonzales, Shaykha Helen, Shaykha Paula, Reverend Marilyn and all others who painstakingly took it to help us with reaching out to people of all walks of life. Thank you for all your support and love as we take our message across cultures and nations. 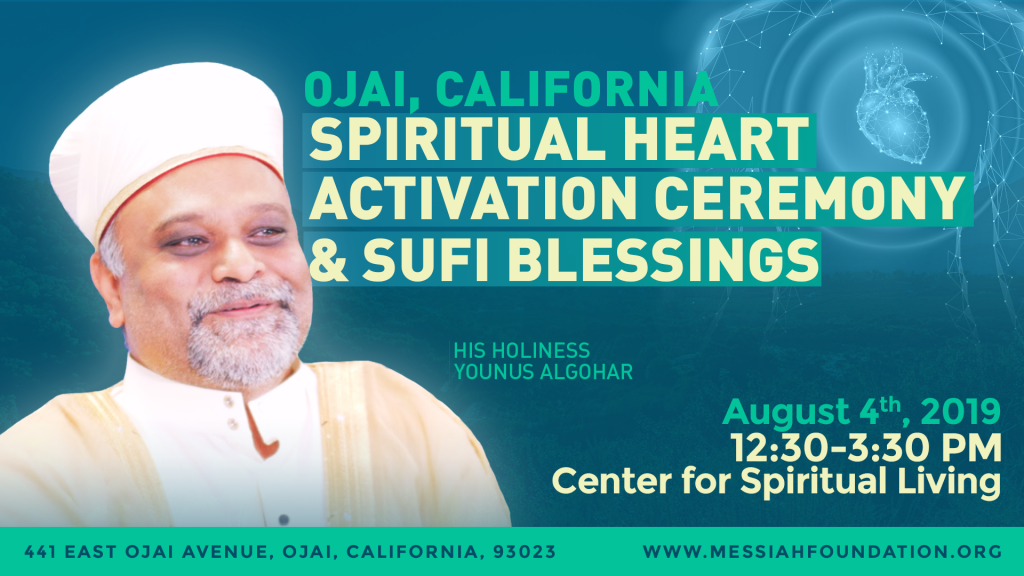 We are pleased to announce that Messiah Foundation USA and the Ojai Center for Spiritual Living have invited Sufi Younus AlGohar to be the Guest of Honour at the Spiritual Heart Ceremony in Ojai, California! The programme will take place at 12:30-3:30 PM PST on the 4th of August. It will be open to the public and include a spiritual healing session, Ring of Love and Activation of the Spiritual Heart.