To cool down a very hot room, we need to open some windows. When there is radicalised community living in the area (and the youth is getting radicalised), we need to promote Sufi thoughts which will dilute it. – Younus AlGohar

Are We All Progeny of One Adam?

– Many religious people believe that all humanity is the progeny of one Adam, however Lord Ra Riaz Gohar Shahi explained that there have been 14 000 Adams. In His book, The Religion of God (Divine Love), Lord Ra Riaz puts forth an irrefutable argument to support this, which is so obvious and evident that one does not need to verify it.

– People of China, Japan, South Korea bear a good amount of resemblance to one another while the same can be said about people from Middle Eastern countries as well as South Asian countries. If you stand a Pakistani, Arab and an African in a queue and ask whether they come from the same Adam, the answer would be a resounding no. People from different Adams all have different temperaments and may differ in body shape as well.

– When Lord Ra Riaz visited Arizona, a leader of a Native American Tribe came to meet Him. Lord Ra Riaz asked him, ‘Where do you think your Adam came from?’ He replied, ‘According to our religious books, he came from the Middle East.’ This was in reference to Adam the Eminent One, mentioned in Christianity, Judaism and Islam. He then said, ‘According to our oral history and cultural books, our Adam came from the mountains of South Dakota.’ This is an anecdote supporting the fact that there have been more than one Adam who came to the world.

– Charles Darwin’s Theory of Evolution states that man evolved from apes. This is not entirely true because not all people have come from apes. When, in Moses’s era, some of his people disobeyed him, God punished them by turning them into apes. However, the women who were pregnant, though they were transformed into apes, they gave birth to human babies. As a lesson for humanity, the progeny of apes have some attributes of apes, such as their preference to drink more rather than eat. Such people can be found in Europe. Similarly, people in Africa who rejected the message of Prophet Seth were cursed by God and turned into donkeys. The pregnant women among them gave birth to human babies. 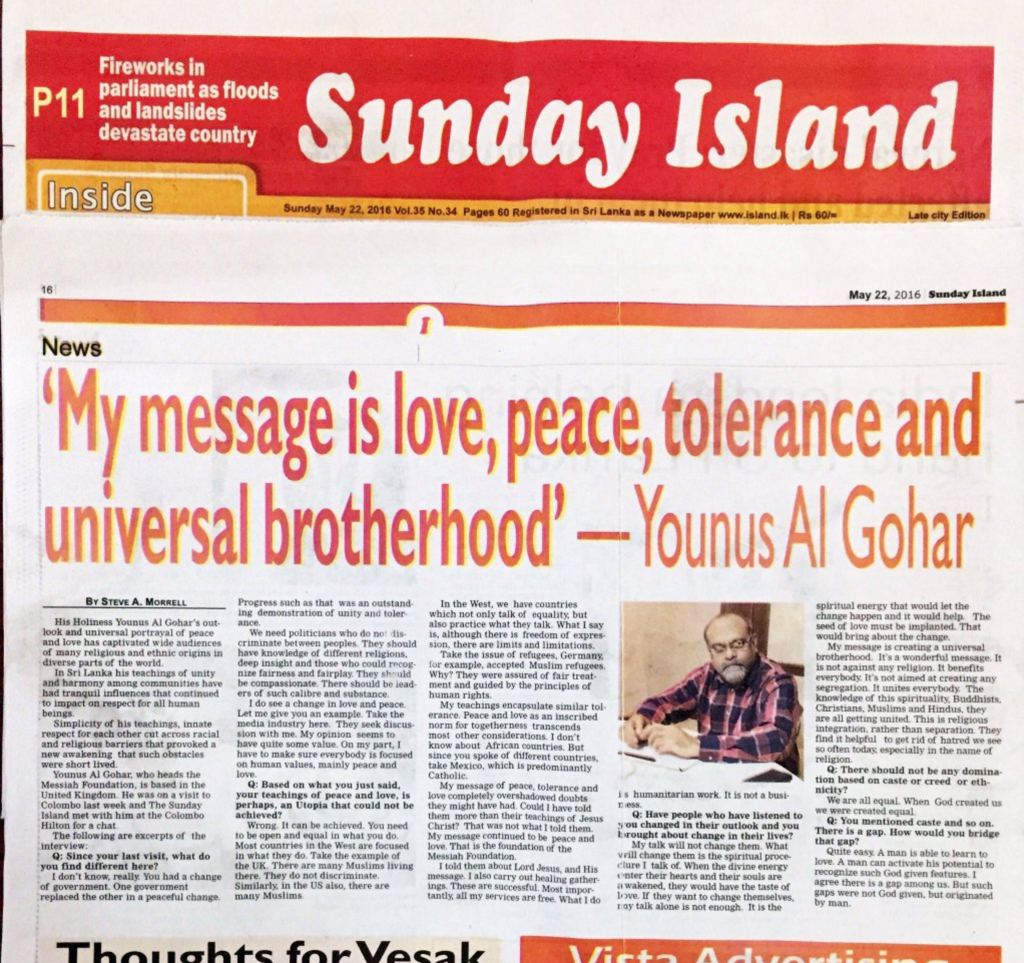 Recently, Younus AlGohar sat down with Steve A. Morrell of the Sunday Island to discuss spirituality and Younus AlGohar’s unique message for the people of Sri Lanka. Read the published piece here.

The Revolution of Love | Inqilab-e-Ishq

Younus AlGohar talks about human history in an unprecedented way. He talks the audience through the different revolutions that humanity has experienced and why they only occurred in the last 6000 years. He gives glad-tidings of the Revolution of Love that will occur with the bounty of the Awaited One Lord Ra Riaz Gohar Shahi.

⁃ God sent 14 000 Adams. 13 999 of these Adams were made with the clay of this world and they didn’t have knowledge of spirituality. Their worship was done with the body. In the era before Adam the Eminent One’s arrival, if somebody adopted a religion, the only difference was that they would start to worship. Their character would not be changed. Your character is directly linked to your Nafs (Self) and Qalb (spiritual heart); if your Nafs is getting purified and your Qalb is getting enlightened with God’s name, you’ll be inclined towards God.

⁃ God gave different names to his prophets and messengers. David got the name Ya Wadood while Moses got Ya Rehman, which are related to different attributes of God. Mohammad got the Personal Name of God, Allah, which took him straight to the Person of God. All of God’s names are good.

⁃ Today, people have forgotten the knowledge of eminence. No matter what religion you follow or what race you belong to, if you do not have the knowledge of eminence, then you are no different from the Adams who predated Adam the Eminent One because you are all dark by the heart. Imam Mehdi Lord Ra Riaz Gohar Shahi has introduces spiritual knowledge today in a form that the world has never seen before. With this spiritual knowledge, you can know yourself. You can find out what you chose for yourself in the Primordial Times and what your ultimate destiny is.

no comments
Upcoming: The Revolution of Love in Peru
14th May 2016|Uncategorised

Messiah Foundation International and the Universal Great Brotherhood are proud to announce that The Revolution of Love event in Cusco, Peru will take place on June 25, 2016.  Younus AlGohar will deliver the keynote lecture.

In preparation for this programme, we have been actively promoting the message of divine love and showing residents of Cusco the divine signs. Many people have shown their appreciation for our message and have expressed their interest in attending the programme.

I want to tell the world that the holy place known as the Holy Cubicle (Kaaba) is for everybody. It is for Christians, Hindus, Jews and Muslims. Currently, the Saudi Royal Family has disallowed all other religions for except Muslims to pay pilgrimage and homage to the holy place.

God has a plan according to which people of all religions soon will be able to travel to the Holy Cubicle.

According to the divine plan, the image of Moses is also prominent on the Holy Black Stone, which means the Jewish people can come. This stone is sacred not only for Muslims and Christians, but also for the Jewish community.

The Holy Black Stone has the image of Lord Jesus Christ, which means all those who believe in Jesus have the right to visit that place.

This image is not painted by human beings; it is the work of God, the act of God.

Images of four members of the Community of God are visible; they’re standing behind the Awaited One Lord Ra Riaz Gohar Shahi’s image in the Holy Black Stone.

This Holy Black Stone will be greatly helpful to establish the fact that the entire humanity should convert to One United Nation (a universal brotherhood) that will love God and God will love them.

no comments
#AskYounusAlGohar: Was Hitler A Zionist?
7th May 2016|Lectures • Videos

#AskYounusAlGohar: Was Hitler A Zionist?

Question: On LBC, Ken Livingston said that Hitler was a Zionist. I heard that some Jews also say. Many people say he read the Quran then killed 6 million Jews.

So he got the idea from the Quran? Come on.

Hitler did the Holocaust and it was his own perception and idea. He was a Christian; he was not a Zionist.

In Germany, even the women are well-built and tall. What he did was he collected all the tall men and all the tall women; he asked them to sleep together and produce children without marriage, so that he could have a new race. This was his idea and it did not come from the Quran.

Any Jew who becomes an extremist becomes a Zionist. You cannot say a Christian is a Zionist.

There is a bad apple in every garden and a bad fish in every pond. In a similar way, there are good and bad people in every religion.

There are bad people among Muslims, Christians and Jews but not everybody is bad. If somebody is bad, don’t think his religion is bad. Individuals can be bad; religions are not bad.

Christianity, Judaism and Islam are not bad. If some bad person is practising Islam, then that bad person is bad; not Islam. Similarly, if some Jews are bad, it doesn’t mean the religion is bad. It is about individuals.

Because the conjecture about Islam has gone bad, now people are attributing all sorts of bad things to Islam and the Quran. You need to call a spade a spade; you can’t paint anything in your own colour and say, ‘This is bad.’

How come Islam did not inspire people in the 1400 years to carry out carnage and become savages who do not let anybody live?

I’ll tell you something. According to the Jewish beliefs, God promised them the Promised Land. God is supposed to grant them the possession of that land, so [they should] leave it to God. God will do it.

If you are making efforts, promoting militancy and you are trying to take the responsibility of God in your own hands by trying to acquire that land by force, you are not Jewish. You are manipulating the words of God.

If God thought it was a very small, petty issue, he would have said, ‘Make and effort, you can do it.’ God would not be bothered to make a promise if you were capable to retain the land. God did not say that; God said, ‘I will return it to you and that is my promise.’ God does honour his promises. He doesn’t make fake, empty hollow promises.

These people who are making efforts and promoting militancy and terrorism can never be successful. The time will soon come when, on behalf of God, [Lord Ra Riaz Gohar Shahi] will fulfil the promises.

[She was not gifted a] home. It was a garden.

There was a quarrel. As soon as Umar bin Khattab became the caliph, he summoned the daughter of the Prophet, Fatima. He said, ‘The Garden of Fidak is property of Islam; it is not your property so you need to return it. Bibi Fatimi replied, ’It was gifted to me by my father.’ So this is in Prophetic Traditions.

When he was demanding Bibi Fatima to withdraw possession of that garden and the conversation became heated, he got really emotional and angry. He was an unreasonably angry person. Out of anger, he pushed Fatima tul Zahra and she fell on the door. There was a big nail in that door and that nail went into her stomach.

So it was a foreign object made of iron and it went inside. When you go into surgery, the equipment they use is all sterilised. They are made of stainless steel and they cannot be rusted. The nail went into her stomach, there was a big wound and it started bleeding. The body was entirely poisoned. 6 months after this incident, she died. This is recorded in Prophetic Traditions.

Even the scholars of Deoband narrate this story – not just Sunnis and Shias.