Why Have Religions Been Intolerant of Homosexuality?
29th June 2016|Articles

In 1996, when I lived in Manchester, United Kingdom, I used to drive a taxi. In the middle of the city centre, there was a village called Gay Village. I was the only driver from a Muslim background who was happy with them. They would often ask for me to pick them up. I found that these gay people to be very mellow and soft-spoken. They were not violent at all. That was my experience.

I have spoken at length on how the Islamic law was formulated and the harsh punishment which we see in Islamic law was prescribed for a specific reason. The problem is: the world is not aware of the background information. When you don’t know the background information and only rely on what you see in front of your eyes, the chances are, you will be greatly mistaken. Sometimes, even what your eyes can see can be deceptive.

Before I continue on this subject, I would like to tell everybody: do not ever think that I am either in favour of homosexuality or against homosexuality. I am discussing the background information: how homosexuality has been abhorred in religious text of Christianity and Islam. What was the reason such a harsh punishment was prescribed by God for a crime which involves two individuals pleasing their bodies?

Human beings today are more aware of their rights in comparison to times in history. 1400 years ago, the human population was scattered and people lived remotely. They were not in contact with each other. There was no concept of cosmopolitan cities. Today, we are more busy with gadgets. We are spending more time at our job, and then we come back home and watch television or use our iPhones, laptops, etc. It is quite safe to say that we are now living in a virtual world. We have distanced ourselves from practical life as science advances. Interaction with people is being done more online rather than in face-to-face meetings. The entire world has become one global village.

Some years back, it was so hard to keep in contact with my family in Pakistan. Every time I  would think of calling them, I would visualise spending £2.50 per minute; I would think, ‘That’s a lot. Forget about it.’ Then, in 1996, a friend told me to open an email account. I opened an email account with Hotmail.com and was able to email a friend in Pakistan. I was so happy; he got it and replied. I was all free from Pakistan.

It was so difficult to be in contact with people who lived in other countries. Even in Pakistan, if you were calling from Karachi to Lahore, it was a lot of money. About 15 years in the United States of America, if you were calling from one state to another, it was a long-distance call. So [in the past] you were in contact with people who live nearby you. We’re living in times today where even in one home, with our family members, we do not communicate really well. Forget about people living in your neighbourhood.

1500 years ago, towns and villages were like a home. Everybody knew everybody. You couldn’t disappear. If you became a homosexual, then the problem was that this would spread like fire. The chances were that everybody would be afflicted with this type of lifestyle. The Bible is 2000 years old whereas the Quran is 530 years younger than the Bible. There is a lot of time between the Bible and the Quran. The Quran is the latest of God’s word. In the Bible, God talks about homosexuality in a disapproving manner.

It will be like a medicine that you want to take as a cure for a disease. You want to read the information provided with the medicine. There are hundreds of side effects mentioned there [such as blood pressure and heart attacks]. By the time you finish the leaflet, you will say, ‘I don’t want this medicine.’

People in the west who think Islam has said, ‘Homosexuals should be killed,’ are not fully aware of what Islam is and what Muslims do. I can bet my life on it: there are more homosexuals among Muslims than in any other nation.

I heard that the King of Oman is gay. He is gay for a funny reason. Somebody told him, ‘If you marry and have a son, your son will kill you and become king.’ So he never touched a woman; he decided to have sex with men because men will not produce a son.

I do not know how many Muslim priests are not homosexual. In Pakistan, over 90% of Muslim priests – who lead prayers in the mosque five times a day and who teach kids how to recite the Quran – are homosexual. There is a very thin blue line. Being homosexual is different, but there is one more aspect. Among Muslims, Muslim priests want to rape children and men. They do not want [anything done to them physically in return].

Among Muslims, there is a very common problem: people want to do everything, but they don’t want to talk about it.

If somebody is a homosexual in Pakistan, he doesn’t want to admit it in public because he feels ashamed, but not because he feels guilty. He thinks, ‘What will people say?’ Whereas, in the western world, they want to do it and they don’t want to hide it.

In the olden days, there were few people living together. The problem was that [they feared], ‘If one man is afflicted, others will do the same. Then what will happen?’ If there are only 50 men living in a village and all become homosexual, what will the women do and how will they have kids?

Today, the human population is in billions but there was a time in history when people would live remotely and they were not aware of others’ existence or presence. If there were 50-100 men in one village, that was the entire world for them.

The Quran was revealed for people of the Arabian peninsula, whose temperament is very hot. If you do not swear at them or beat them, they don’t listen to you. They do not understand the language of love. They have been warriors. Killing among Arabs is a pastime. They used to kill each other over tiny issues like water. They would start enmity over it and the killing would continue through generations.

Now, through evolution of intellect, civilisation, and people’s own prescribed values for their life, humanity has come to a point where they want to make a choice for themselves.

They want to lead a happy life for themselves. Sometimes you make a folly decision and only after you have come to some kind of harm, you learn a lesson and then you revert. However, we are living in a different time. It should be allowed for people to let them choose what they want for their life.

Some people do not want to see or love God. I think it is useless teaching them or even forcing them to believe in God. Let them be the way they want to be. Nothing should be done by force; nothing should be imposed. It should come from acceptance of the heart. If your heart accepts something, then you do it, believe it and act upon it.

If you force some ideology on others, and under fear, even if they do it, they won’t enjoy it.

So Islam, Christianity and Judaism do not allow homosexuality in their religions, but these religions have failed. So now, there is no point. You are doing every other thing wrong, but when it comes to homosexuality you want to follow the Bible. You’re deceiving others, depriving them of their belongings and your lifestyle is based on a lie. You’re not an honest man, you do not honour people and you do not respect humanity.

You don’t do anything that your religion teaches you to do, but only when it comes to homosexuality, you want to be a Muslim and a Christian. Then you say, ‘This is bad. I cannot see this.’

My point of view is, even according to Islam, God has been recorded to say that he will forgive all your sins for except one: if you find a partner with him (known as Shirk in Islam). God is very intolerant to this. 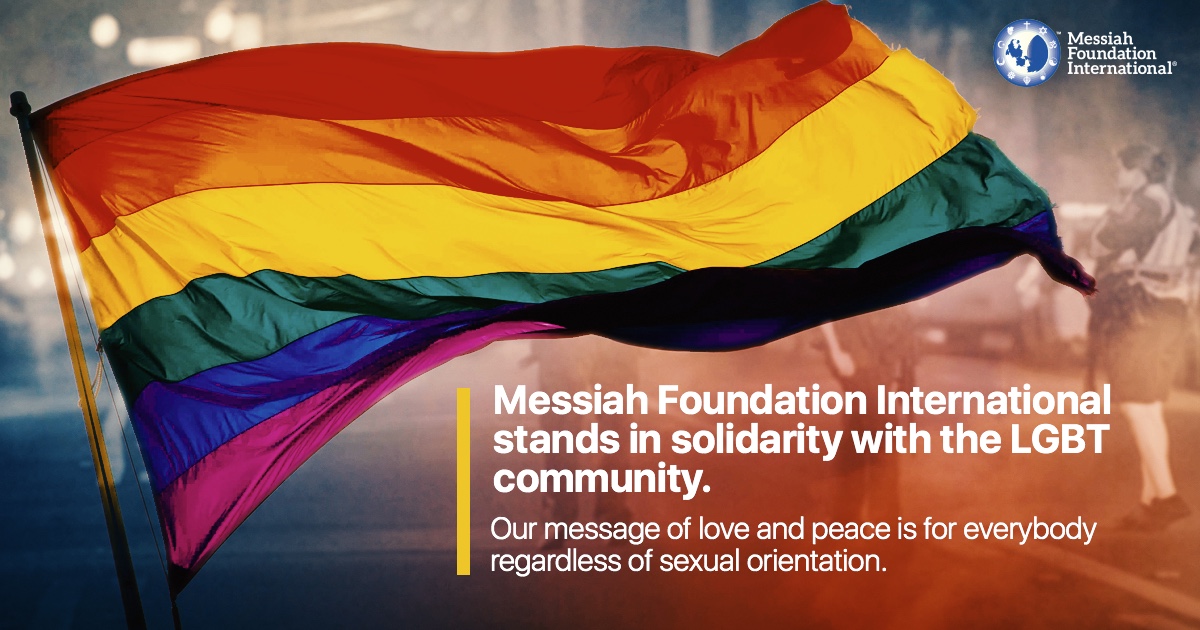 The spiritual values we represent have no problems. This message of love and peace is for everybody, whether you are homosexual, heterosexual, bisexual or asexual. These things belong to your body.

The message and teachings of Lord Ra Riaz Gohar Shahi are so profound and broad. Lord Ra Riaz says, ‘Even if you do not follow a religion, come and obtain divine love. You will be better than those who follow a region but they do not love God.’

If somebody does not practise any religion, do you think he will understand that homosexuality is bad? If he is a homosexual but he wants to learn to love God, will you tell him to go away? No. The message of Lord Ra Riaz is for everybody: love for everybody.. Whether you are a gay, lesbian, bisexual, asexual or transgender, we have nothing to do with your gender; our message is for the soul.

So Messiah Foundation International does not have a problem with LGBT community. We consider them as our brothers and sisters. We have love for them like we have love for anybody else, without discrimination.

If you want to become a homosexual or not, it is entirely up to you. It has nothing to do with your soul.