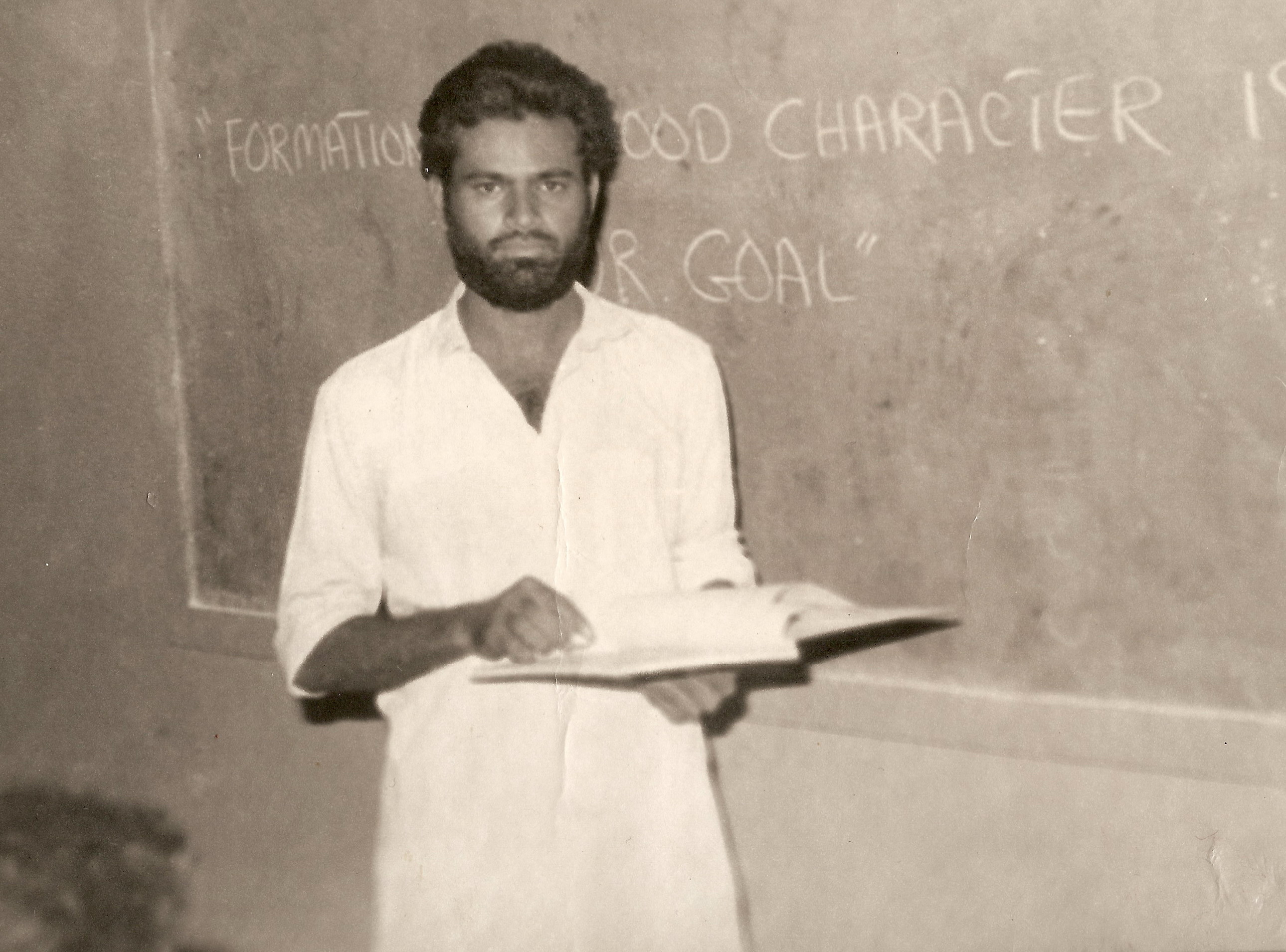 The biggest issue for humanity is to determine who is trustworthy. I found out after many years of worship, unshakeable loyalty and sincere efforts of finding the truth that God hasn’t been fair in dealing with human beings.

God’s policies and planning have created a monstrous vacuum for the people who want to understand religions and God.

There are many questions in every religion which the religion does not answer.

Science has contributed profoundly, hugely, to healthy and positive stimulation of the human brain. Now, human beings have developed a habit of understanding things before they want to do it. Ever since human beings have become sensible, they only want to do things that make sense. If things do not make sense, they wonder, ‘Why should we follow it?’ If there is some kind of doubt, people become apprehensive.

When you are a religious person and at the same time you are rational, sometimes religions ask you to believe in things even when they do not make any sense. This is the point where people slip off the right track and happen to embrace wrong interpretation of the religion.

This is the space in which any philosophy can fit because there is ambiguity. Every other scholar would want to come up with his opinion, fit it there and declare it to be Islam.

However, according to the Traditions of Prophet Mohammad, he clearly suggested to Muslims, ‘If you find anything dubious, leave it out [of the religion].’ When you start reading the Quran, the very first words are ‘There is no doubt’. There should not be any doubt in the religion — this is the understanding is coming from God.

What if there are doubts? A doubt is a thought that disturbs you when things do not make sense.

The most important verification of things will come from your own inner voice.

There are many things that you want to verify but you do not have somebody who has been divinely delegated to give verification. However, if your conscience is pure and spiritualised, ask it and you’ll get the right answer.

God hasn’t been very careful. When I speak on such a subject, I do not aim to disturb religious emotions of people or hurt anybody’s feelings. I do not intend to demoralise people or devalue any religion. I share my feelings.

I share with you how difficult it was for me to understand what the right path was. As a young Muslim, a medical student, born and bred in Karachi, Pakistan, it was so difficult for me to determine this.

Among Muslims, it is very common to declare people of other sects as infidels and hypocrites. It is a normal pattern in Pakistan. Sunnis will call Shias infidels and Wahhabis will call everybody else infidels. The irony of it is that people do not even know the meaning of the word, ‘infidel’.

My father used to tell me, ‘When you want to pass urine, you must sit down.’ I asked him why and he couldn’t explain. He said, ‘Our religion tells us to do this.’ The problem with me was that I wanted to avoid droplets of toilet water splashing back at me, so I would make sure that I was standing. My conscience had a problem with this; I struggled and asked many people to explain why the religion dictates it.

I did a BSc Honours in microbiology, physical chemistry, and organic chemistry.

People who know what I am talking about know how difficult these subjects are. Physical chemistry is all about your body: your liver, kidney, stomach, etc. It explains things like what happens when you don’t eat on time, when you do not drink water and what happens when you eat bread or rice. Somebody who has obtained a master’s degree in microbiology, his knowledge of the human anatomy is far greater than a physician because he knows the inner and outer workings of the body.

Whenever I had a problem understanding physical chemistry or organic chemistry, I would ask my teachers and they had to answer my questions. This is how the process of learning progressed. We would understand the subject and then go ahead.

I, as a student thought the same thing must be applied to the religion.

I am not an atheist. I believe in God, Abraham, Adam, Moses, Jesus, Mohammad and all the favourites of God (whether they were at the time of Moses, Jesus, Abraham or if they somehow adhered to the spiritual aspect of Islam); I respect them all.

However, how would you feel when you are genuinely seeking to find the right path that leads to God and there is nobody who can help you?

When you are seeking to become somebody who loves the Prophet Mohammad and who is able to see God? When you want to become somebody like Data Ali Hajweri or Khwaja Gharib un Nawaz and you do not find the right answers? Instead of getting answers, the religious scholars tell you, ‘This is not possible.’

We read stories of Sufis like Data Ali Hajweri and Abdul Qadir Jilani. When somebody endeavours to be like them, Muslims say, ‘How can you become somebody like Data?’ In my heart, I think, ‘Why not? What is wrong with me? He read the Quran. If I have the same Quran as him, what is the issue?’

People have included many of their own opinions in Islam and think that this is Islam.

Religious scholars say, ‘You cannot even be equal to the dust that touches the foot of Ali (A Companion of the Prophet).’ That’s good, but what is wrong with me? If they say, ‘Ali is God,’ then it makes sense that I cannot be equal to him, because I am a human being. However, if he is a human being and I am a human being, then why can’t I say that I want to love God like Ali did?

Muslims have a problem. They think that there is just one Lal Shahbaz Qalandar and nobody can be like him, or that Sai Baba is just one and no one can be like him. They think no one can be like Data Ali Hajweri. However, before Data Ali Hajweri became a saint, what did he think of Islam, himself and other spiritual dignitaries? How did he become Data Ali Hajweri? Initially, when he was born, he wasn’t a saint of God. How did Moinuddin Chisti become Khwaja Gharib un Nawaz? Was he a saint even when he was in the womb? If he became a saint from reading the same Quran as I now read, what is wrong with me and my recitation of the Quran? What is wrong with my research, probe and study of the Quran?

According to Islam, for every word of the Quran I read, I gather 70 Hasanat (good deeds). I have read the Quran thousands of times. Where are all the good deeds gone? On every auspicious night, I spent the entire night remembering God. I was told that in these special nights, angels will come and embrace you, however I never felt anything.

When I read the books of Sufis, they told stories such as, ‘On the Night of Ascension, this prophet came to see me.’ The question arises: why does nobody come to me? Should I just say that these are all bundles of lies?

These are my questions.

I have spent at least 20 years in schools and colleges. I have spent 20 years reading books. It is enough to stimulate my brain. If this is the same Quran [as the one the saints read] and I am reading it, what is wrong with me? I want to love God, become his friend and spiritualise my life, but where is the flaw — in me or in the Quran? If the Muslim scholars told me, ‘You can also become Data and Khwaja, but this is what you have to do,’ I would not ask one more question. I would do what I was supposed to do. Even then, if I did not succeed, I would try to find out whether I was doing everything correctly, where the mistake or flaw was.

However, as a Muslim, you have no help from anywhere. Muslims have loads of questions but nobody wants to answer them because nobody knows.

All religious scholars ponder upon are the issues relating to ablution and family laws. If you ask them, ‘God said in the Quran that Salat will stop you from the bad deeds. I have been regularly offering Salat for the past 10 years, but it is not stopping me from bad deeds. What is wrong with my Salat or me? How do I offer Salat so that it may stop me from committing bad deeds?’ Nobody has any answer. This is why Islam has been destroyed. There is no more Islam.

These questions go to every single religious scholar in this world who claim to hold any office in Islam. If he answers my questions, I will do as he says.

When you buy a table or chair from Ikea, they will give you a box and you have to assemble it yourself. Inside that box there will be a manual. You read the manual and assemble it. If whoever has compiled the manual made a mistake, you can never assemble it right. Therefore every manual with their product has to be perfect, otherwise their business will go down. They want to make sure that everything is very clear. If it is not, the customer will go back, return the product and never shop there again.

The Quran is a manual for Muslims. The question is: do Muslims understand the Quran? With the help of the Quran, can they find God or the Straight Path (Sirat-e-Mustiqeem)? If they can, why are Muslims divided into 73 sects today?

The only one who has given answers is Lord Ra Riaz Gohar Shahi.