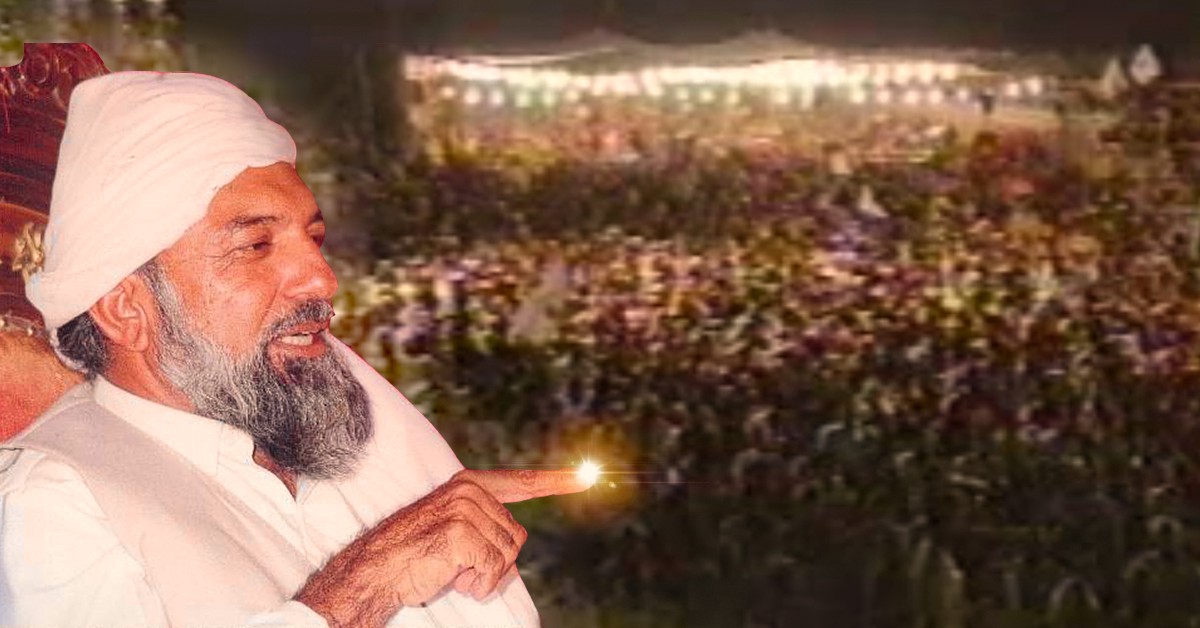 Do not ever believe in what you hear on the grapevine.

According to the Koran, the purpose of the human species is that they become God-conscious. Religions provide people with spiritual mediumship and pave the way for seekers to find a way to God. When religions were corrupted, the knowledge of spirituality — which was the backbone in every religion — became nullified. It vanished from the religions due to which people were left distant from God.

Today, we are in an era where nobody thinks of reaching God. In fact, nobody even thinks of God. They are lost somewhere in the ritualistic mirage of religions. It is a sad story.

His Divine Eminence Lord Ra Riaz Gohar Shahi has shown Himself to the world the most bountiful, merciful and ultra-beneficial to humankind. HDE Gohar Shahi has struggled enormously well to elevate intellectuality and spirituality among claimants of different religions. HDE Gohar Shahi provided food for thought to the people who seemingly struggle to find God.

Spirituality was once the backbone of every religion without a name. Today, HDE Gohar Shahi has signified the significance of spirituality in our lives.

Muslims have, somehow or other, developed their understanding to be more sceptical than those who appreciate the spiritual truth. The element of extremism has always existed in Islam since the very beginning. It is such a pity that the early caliphs of Islam became victims of Islamist extremism. Ali, the cousin of Prophet Mohammad, was murdered by an Islamist extremist. Umar bin Khattab was murdered by Islamist militants. Usman bin Afaan was also killed by Partisans of Ali (Shiite).

People who believe in the same religion — whether they believed in that religion 1400 years ago or today — their level of intellectuality has decreased rather than increasing. They’re quite sentimental. People do not like to be guided correctly. They have this tendency of going with the flow. If you are a sheep in the herd and you see that all the sheep are going in one direction, you do the same.

HDE Gohar Shahi is the only universal spiritual teacher who has shown to the world more courage, gallantry and bravery than it was required of His Divine Eminence.

HDE Gohar Shahi went to every single faction among the sectarian elements in Pakistan, and — right in their faces — he told them, ‘What you practise is not Islam.’

He further said, ‘This is Islam. When you practise this, you will not like to call yourself a Sunni, Shiite or Wahhabi. The true Islam will connect you with God and his messenger. You will take pride in being a true disciple of Prophet Mohammad.’

People who never wanted to know Islam and who wanted to use Islam as a fake guard on their bodies at the same time — vehemently, they disapproved of this realistic version of Islam which consists of spirituality.

You cannot reach your reality without spirituality because your reality is your spirit. The first thing that you need to do is become self-conscious. You need to know who you are. If you say that you are a Wahhabi, Sunni or a Shiite, this is not you. Your reality lies in the awakening of your soul.

This is a strange phenomenon by which His Divine Eminence conducts spirituality and divine light — and HDE Gohar Shahi Himself is the destiny of all souls and spirits.

It will take one to know God before he is able to know His Divine Eminence Gohar Shahi. Those who do not understand God should not attempt to know who HDE Gohar Shahi is.

Sectarian elements in Pakistan for the last 35–40 years have been trying their best to suppress HDE Gohar Shahi’s teachings, to halt HDE Gohar Shahi and hinder in His mission. They have done their best on an individual level on a governmental level. However:

The truth of HDE Gohar Shahi is like a spring. The more you suppress it, the more it goes up.

This is especially true when people have experiences in which their religiosity and spirituality were restored in the fuller meaning of the phrase. They found their ultimate goal in form of HDE Gohar Shahi’s blessings.

So on the one hand, people have experiences whereby they will return to eternal life, their hearts were enlightened and they were free from different physical and spiritual ailments.

On the other hand, there is speculation all over the world among Muslims that HDE Gohar Shahi and His teachings are not in accordance with the Koran.

The creator of this universe, God, is the ultimate source of knowledge. Even after the revelation of the Koran, he can bless anybody with more knowledge than in the Koran — this is called Ilm-e-Ladunni.

This is the type of knowledge which is neither part of the Koran, Bible, Torah, Talmud or Psalms of David; yet it is as truthful as all these celestial books because it comes from God.

Ilm-e-Ladunni is the knowledge that comes directly from God.

It is more powerful than the revelations [in the celestial books] since they come from the Guarded Table and Ilm-e-Ladunni comes directly from God.